La Biblia al Alcance de Todos is the Spanish version of Dr. Mike Armour's highly successful book A Newcomer's Guide to the Bible, which is now published in over a dozen languages.

La Biblia al Alcance de Todos serves thousands of Hispanic readers whom other introductions overlook. The typical guide to the Bible aims at readers who already know many Biblical terms and events. But large numbers of adults lack even a broad familiarity with the Bible. For them the most common Biblical terms often seem foreign.

Therefore, La Biblia al Alcance de Todos assumes that every concept must be explained the first time it is used. In fact, it presumes a reader who may have never opened a Bible before.

This book is perfectly suited for Bible classes or for personal Bible study.

A personal workbook which accompanies A Newcomer's Guide in English is currently being translated into Spanish to serve as a companion volume to La Biblia al Alcance de Todos. 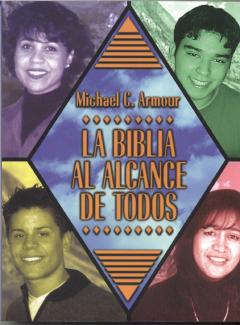 Sales tax will be added to all shipments to addresses in the state of Texas.

To protect your privacy and security, on-line purchases are transacted through secure servers certified by Verisign.